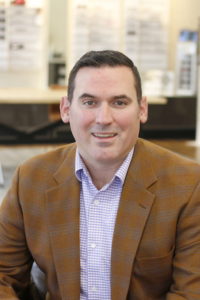 Andrew Bateman is a Lincoln native, growing up in central Lincoln and graduating from Southeast High School. After getting his undergraduate degree from the University of Nebraska- Lincoln, he lived in Bloomington, IN for the next four years, earning his Doctorate of Optometry from Indiana University. He and Katie opened Clear Vision Eye Care in April of 2008. It has been so exciting to watch northwest Lincoln grow over the last several years. Last year Dr. Bateman was elected to the Nebraska Optometric Association Board. He is passionate about optometry and enjoys being able to support the profession on the state level. Dr. Bateman’s favorite part of his job is the patients- forming relationships and getting to catch up with them year after year. His favorite frame lines are Rudy Project and Tom Davies. When Andrew isn’t “checking eyes” (as his daughter says), he is likely spending time with his family. Dr. Bateman enjoys fishing, cycling, jogging, and just about any activity that includes his wife, Katie and two daughters, Alece and Olivia. He is also known to be a sports fanatic, and spends more time than he might admit on Husker fan pages. His favorite locally owned businesses include The Oven and The Lincoln Running Company.

“I've been seeing Dr. Bateman since 2008 and won't go anywhere else. My initial visit with Dr. Bateman was on a Saturday. I had severe headaches, swollen optic nerves and needed to see an ophthalmologist. Dr. Bateman took it upon himself to contact an ophthalmologist that day and call me back at home (on that Saturday) to let me know I had a Monday 8 am appointment. This was my first visit to see Dr. Bateman and through that, earned my trust and respect. I've returned ever since and will continue to do so. I've since moved to Florida and each summer when traveling back to Lincoln, make sure I schedule my eye exam. Dr. Bateman takes time with, listens, explains things, answers your questions thoroughly and is an excellent optometrist. In addition, Clear Vision Eye Care is a beautiful, clean office with an excellent staff.”

You can schedule your next appointment with us online!

Let's continue the conversation over on your social network of choice.